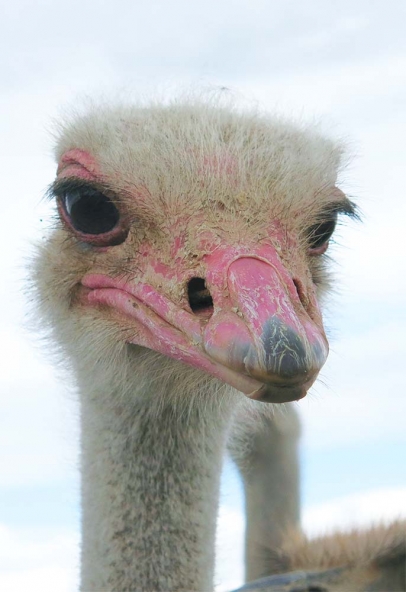 At the McCoy ranch, a few of the birds have grown up to nine feet tall and weigh more than 300 pounds. Despite their impressive height and weight, ostriches can run up to 40 miles per hour and perform a hypnotic dance. During mating season, the males woo females by hunching forward, spreading their wings and shaking their feathers. Ostriches are also polygamists; the males typically have a harem of three or four females at a time.

While Americans generally associate the world’s largest bird with zoos or the plains of Africa, the McCoy family is working hard to bring ostrich to Idaho and beyond. Alex McCoy, founder of American Ostrich Farms in Kuna, first discovered ostrich meat while working in South Africa.

“People here don’t know about it because it’s not a native animal,” McCoy said. “In Africa, they’ve been eating it forever.”

He likened ostrich steak to “a high-quality filet mignon, except with more iron, less cholesterol and far less fat.” According to the USDA National Nutrient Database, a raw ostrich filet contains more than six times the iron, about three-fourths the cholesterol and significantly less fat than raw retail cuts of beef.

But odd, ancient birds aren’t the only innovation the McCoys are working on.

The McCoy ranch uses solar panels to heat its buildings, and McCoy’s father, Brian, is working on developing a hydroponic barley fodder box system that will use just a fraction of the water that traditional barley growing methods consume. The barley fodder box is a recycled boxcar that is filled with shelves of barley sprouts. This allows the farmer to regulate temperature, humidity and other variables (it is similar to the technology some marijuana growers use in states where cannabis is legal). The elder McCoy is experimenting with multi-colored UV lights over the barley, because plants react differently to each of the color wavelengths. 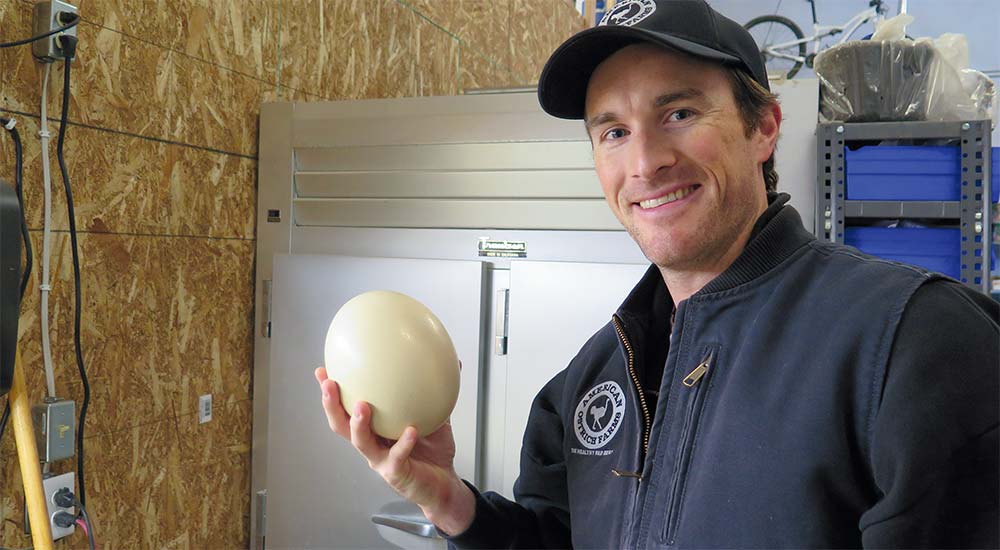 “That’s why I got into this,” Alex said. “If it wasn’t helping the environment, I wouldn’t be doing it.”

When the McCoys bought their ranch in 2013, there were just a couple of buildings and a large tract of farmland. Now there are over 100 ostriches, an egg incubation system and the barley fodder box. Currently, they are working to fulfill meat orders for the Kickstarter donors who helped fund the project, but they hope to start selling meat to stores and restaurants within the next year.

And yet, it won’t be the first time a hopeful rancher has tried to sell ostrich to American consumers.

There has been a market for ostrich products in the US since the 1880s, when the first ostriches embarked on a voyage to the New World. Feathers were fashionable at the time, and trendy women wore ostrich feathers on their hats and dresses.

The market spiked in the late 1980s and early 1990s, when ostrich meat was marketed as a healthier alternative to beef. Investors started selling the birds to farmers with promises of a soon-to-be-booming demand for ostrich meat. Speculators sold birds for high margins, sometimes without ever seeing the birds. Eggs sold for hundreds of dollars, without any guarantee they would hatch. With a high demand for live breeding birds and a low supply from sellers, the price of live ostriches skyrocketed.

“If you buy a bird for $10,000, and you can only make $3,000 from slaughtering it, it doesn’t make any sense to slaughter,” Alex said. Since a retail market was never established, the ostrich industry imploded. People who bought the birds as part of a “get-rich-quick” scheme ended up without a viable plan to sustain their ostrich farms. Although modern farmers have learned from the mistakes of the past and are making efforts to prevent a similar situation, there are still plenty of challenges.

Convincing consumers to switch from beef to ostrich might be the biggest. The McCoys have been working hard to spread the word, but sometimes it’s difficult.

While the transition might take time, Boyd Clark of the American Ostrich Association believes that people are more willing to try ostrich than they were 20 years ago.

“What has changed is the palate of the consumer,” Clark said. “They are more willing to try new, novel foods for health reasons that 20 years ago probably weren’t as big of a concern.”

According to Clark, most people who try ostrich enjoy it. For that reason, when stores start selling ostrich burgers or steaks they often set up sampling booths so people can try it out before they buy it. Another challenge to getting the meat into stores is a simple lack of birds.

“Right now there is a big demand for the meat. There’s not enough of it being produced to meet the demand,” Clark said.

According to a study by Dr. Joan S. Jefferey of Texas A&M, in 2008 there were between 40,000 and 60,000 ostriches in the US. She estimated that a slaughterhouse would need to “handle 200,000 ostriches annually to operate economically.”

Currently, the cost of ostrich is higher than other red meats, but Clark predicts costs will decrease as the industry grows. Online, ground ostrich meat sell for about $15 per pound, and ostrich steak sells for about $30 per pound.

In the meantime, the McCoy family will be carefully tending their flock and prepping their ranch for what they hope is high demand. This could finally be the era of ostrich burgers, ostrich filet mignon and—since a single ostrich egg is the equivalent of two dozen chicken eggs—ostrich-sized omelettes.