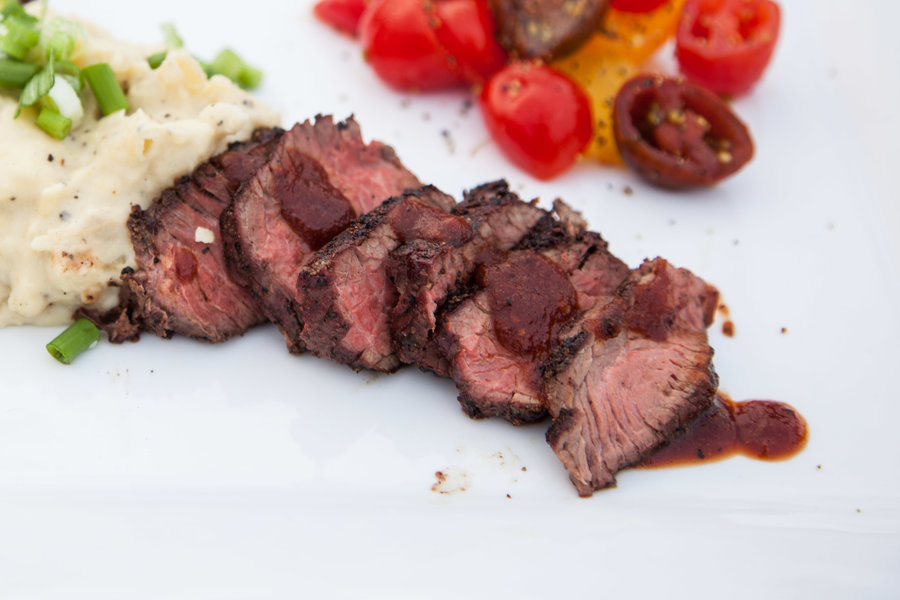 Ostriches at the McCoy ranch.
Photography All photos courtesy of Alex McCoy

Meat from this seven-foot African bird, unlike chicken or turkey, resembles beef in taste, coloring, and texture – in fact, it’s often compared to filet mignon. It’s also leaner – 97-percent fat free – lower in cholesterol, and higher in iron than beef. The other differences between two proteins are the resources and environmental costs it takes to produce each. According to the United Nations’ Food and Agriculture Organization, about 14.5 percent of all greenhouse gasses comes from the livestock sector (an earlier report from the FAO has it at 18 percent), and cattle’s responsible for about 65 percent of that. Additionally, cattle production takes a lot of water, about 1,799 gallons per pound of meat, whereas ostrich uses about four times less per pound.

“Ostrich emits virtually no methane, which is the most destructive greenhouse gas, and cows’ burping and farting emit that,” says Alex McCoy, an ostrich farmer near Boise, Idaho. “By incorporating ostrich into your diet, you’re doing way more to fight the cause of global warming than driving their your car less, flying less, or taking shorter showers. That’s small potatoes compared to the meat you put on your plate.”

So why don’t we eat more ostrich in the United States? To figure that out, we have to look to the past, and why farmers chose to raise the birds in the first place. Ostrich farming first took off here in the late 1800s to supply the plumage used to decorate the era’s ostentatious headware. For the adventurous agrarians who imported the birds from South Africa and set up shop stateside, business was good. The New York Times reported in 1882 that a pound of top-quality ostrich feathers was going for as much as $400, which is about $9,400 today.

But by the eve of World War I, fashion sensibilities changed, and feathers were out. Since farmers were exclusively raising the animals for their feathers rather than meat, that meant good-bye to the ostrich industry. It would be another 60 years before ostrich farming would see a revival. In the 1980s, there was a boom, but the industry became more pyramid scheme than viable agriculture venture with little investment in market creation. Instead, the primary focus was on hatching and selling the birds. The unsustainable industry model imploded the following decade.

“Everyone was so focused on cranking out chicks to sell to some other sucker that no one ever created a viable end market,” says McCoy. “Why would you slaughter a bird for $1,500 in revenue if you could sell it to your neighbor for $30,000? Why turn that into meat? That would be an $800 steak, so no one ever did. And as a result America never became used to eating ostrich.” 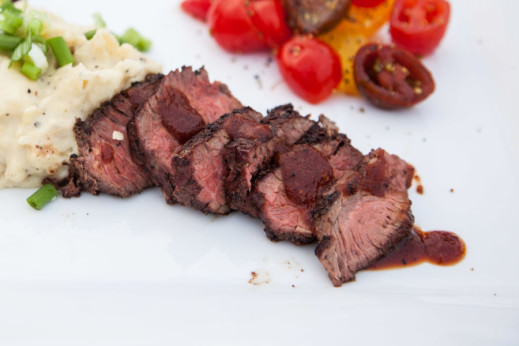 McCoy wants to change that. He became a true believer while living in South Africa where eating ostrich is common. In 2013, he left his finance job at Citibank, moved back to Idaho where he grew up, and began traveling the country to learn as much as he could about ostriches and putting together a flock. He began with 80 birds of diverse genetics, and is now up to 150 on his 120-acre spread. McCoy plans to grow his flock to 2,000 by 2018. Until then, he’s only processing a small number of birds, which he’s selling direct-to-consumer through his company’s website, American Ostrich Farms. As he scales up, he hopes to work with distributors to get his product beyond the local market. And that’s really where getting more Americans to eat ostrich comes in: If ostrich farming can grow big enough to keep prices competitive and get into more stores, the more likely people are going to be willing to try it.

If ostrich farming can grow big enough to keep prices competitive and get into more stores, the more likely people are going to be willing to try it.

While ostrich is available in various places around the country, like the Union Square Farmers Market in Manhattan, no one is distributing the meat at a national level thanks to the limited scale of ostrich operations. Distributors and grocery stores take about 30 percent each of the retail value of a product, leaving the farmer with only 40 percent, says McCoy. So, most ostrich farmers distribute close to home.

However, McCoy’s hoping to inspire others to begin farming ostrich for meat. The birds are relatively easy to manage, he says, lay on average about 40 eggs each a year, require much less space than cows or other larger livestock, and mature in two years for females and three years for males. They grow about a foot a month for their first six months and have a four-to-one feed conversion ratio (which means they can convert four pounds of feed into one pound of live weight), as opposed to grass-fed cattle which have a 10-to-one ratio. McCoy feeds his birds a formula he developed, with the help of a variety of nutritionists, feed specialists, and other ostrich farmers, which contains alfalfa, corn, and soybean, along with a variety of vitamins and minerals the animals need for optimal growth – no antibiotics or hormones, though. Besides the meat, farmers can make money from the skins, feathers, eggs, and fat, which is processed into an oil used for skin care, much like emu oil. McCoy considers these value-added products a bonus for farmers, but feels it is the meat that is the real prize.

“I believe in the potential of ostrich to really transform the red meat industry in the United States. I’m laser-focused on making that happen,” McCoy says.

This article was originally published by Modern Farmer
https://modernfarmer.com/2016/02/ostrich-farm/
Share: